We thought it would be interesting to take pictures of various church buildings and use that as a way to give you an idea of the church scene over here in the Philippines.  So here are a few.

First of all there are the Roman Catholic Churches.  Roman Catholics constitute 85 - 90% of the population.  There is a wide range of buildings; some historical, some large and ornate, some older and smaller and not as nice. 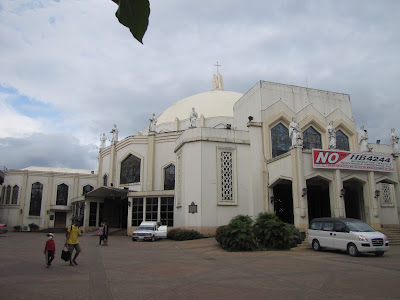 This is the RCC in Antipolo just a few miles from our house.  It is a favorite destination for many RCs during holy week. 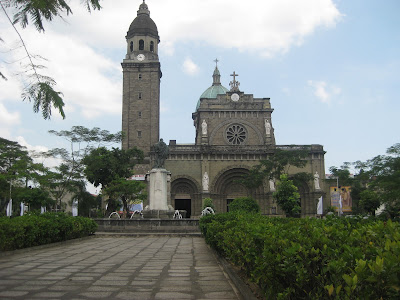 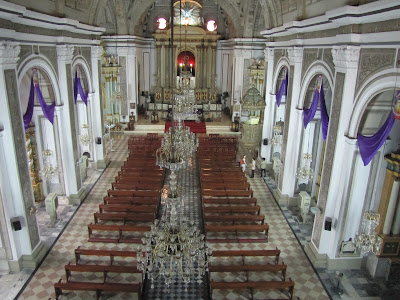 Inside a RCC church 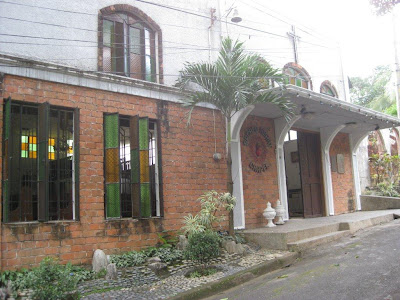 RC chapel in our subdivision

There is also the Iglesia ni Cristo (Church of Christ).  They have many buildings - we have seen them wherever we have traveled in the Philippines.  Some interesting facts:
*They split off from the RCC in the early 1900s.
*They are non-trinitarian and therefore a sect.
*Their members "block" vote - all vote for the same candidate in public elections. 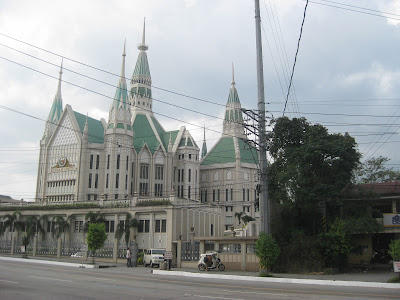 This is the headquarters of the INC in Manila.  There is also has a college on the property.  The buildings are not all this huge, but are all basically the same style. 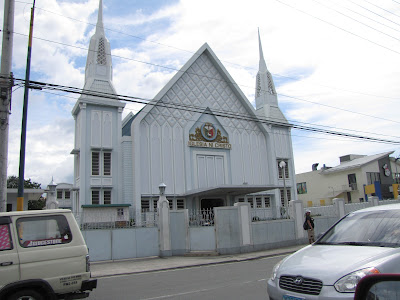 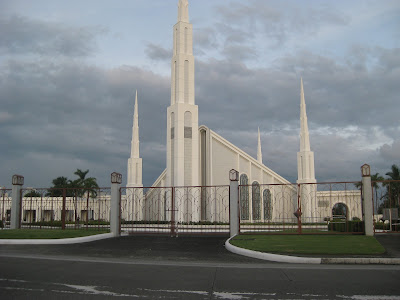 Harder to spot (and thus no pictures), but possibly as prevalent as the others, are many Baptist, Pentecostal and other churches.

Though we might enjoy the architecture and may learn about the history of some of these buildings, yet we know that the building does not make the church.  God is not present just because of a nice building.  Rather God and Christ are present wherever the truth of the Bible is faithfully preached and maintained.  And there God's faithful people are found.

But we preach Christ crucified, unto the Jews a stumblingblock, and unto the Greeks foolishness; But unto them which are called....the power of God and the wisdom of God.

Sometimes it works to have a theme for a blog ...... sometimes not.  But we understand you don't mind the latter.  Thus, here are a few random pictures. 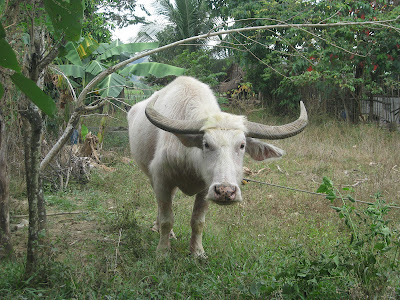 Usually the Filipino "tractor" is black in color, but recently we came across a white one.  This one lives in Gabaldon, right next to the church building of the All of Grace Protestant Reformed Fellowship (where both missionaries preach and teach one Sunday each month). 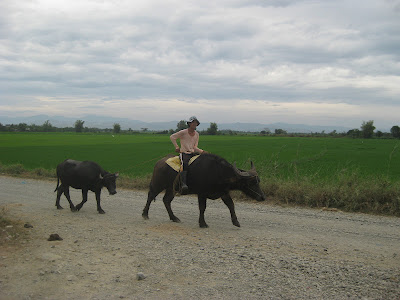 A regular Filipino "tractor" (carabao), with a young one in tow (perhaps headed out for some on-the-job training). 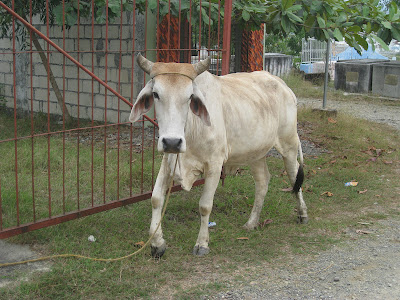 Seen tethered along the roadside. 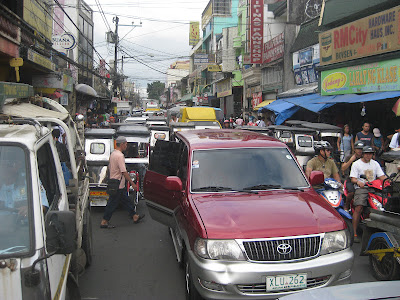 Stuck in traffic - a common occurrence here.  This time in downtown Antipolo, just a few kilometers from home. 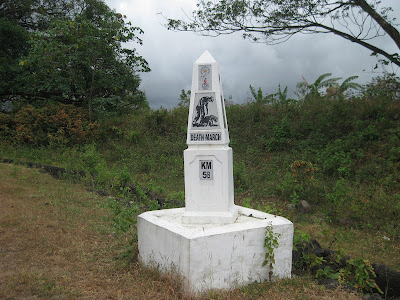 You will find these markers on the Bataan Peninsula, and at every kilometer along the route of the infamous "death march" of World War II. 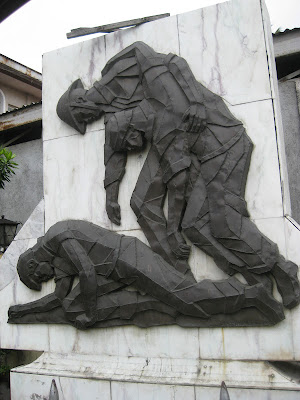 Another monument/memorial along the route of the death march. 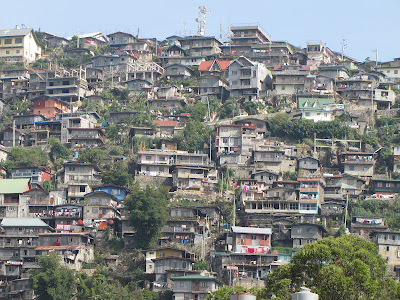 We found it interesting to see how close all the houses are to each other.  Seems that practically every square inch of the hillside is occupied. 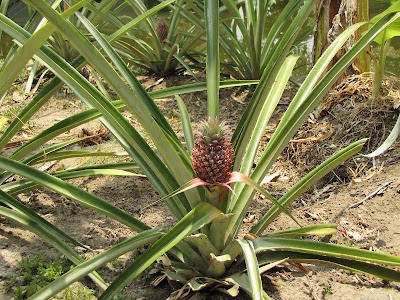 Someone (who will remain anonymous) once thought that pineapples grew on trees.  This picture should disillusion anyone else who may have that misconception.  The pineapples here sure are juicy - delicious! 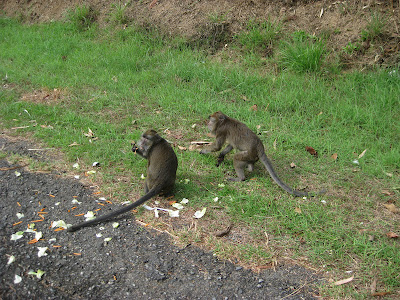 One of the few animals that you will notice in the wild here.  These were rather friendly, and looking for handouts.  Didn't get any from us, though. 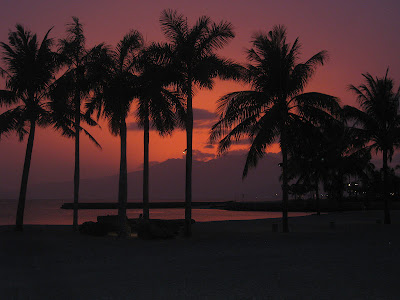 A tropical sunset!
Posted by DashKleyn on Thursday, March 15, 2012 1 comment: 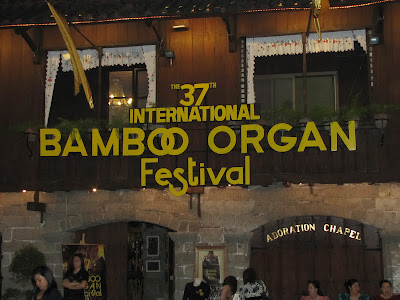 Recently we heard about a bamboo pipe organ in Manila here.  The organ is in an old church (built in the early 1800s) and is almost as old as the church building.  For many years it wasn't working, but they restored it in 1975 and now do annual concerts on it.  This year we were able to attend with Rev. Kleyn's parents. 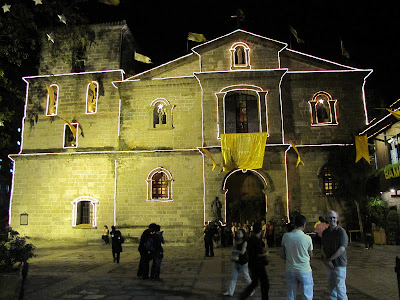 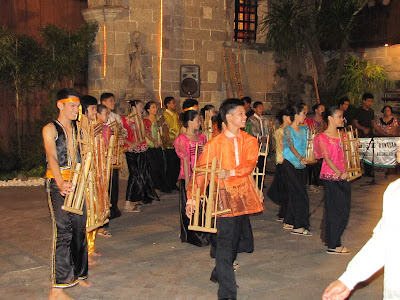 Before the concert there was a group of highschoolers accompanying a marimba with these bamboo instruments in the courtyard of the church.  They played a couple of classical pieces.  Very nice! 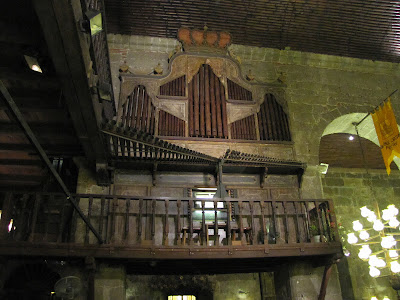 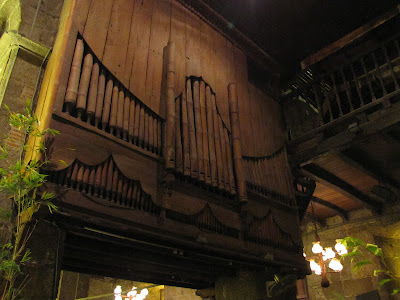 A close-up of the pipes at the rear of the organ. 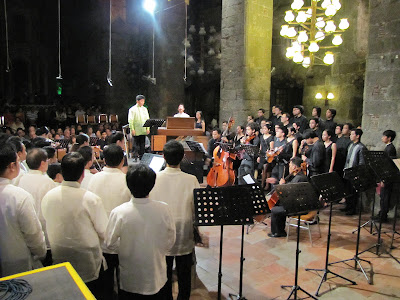 The choirs and chamber orchestra.
Posted by DashKleyn on Friday, March 09, 2012 3 comments:

To Receive Emails of Posts: